2018 Ford Escape Engine and Specs - After having a more comprehensive update last year which is signed with the introduction of a new four-cylinder Ford engine and enhanced things like smartphone integration and some other small-item storage, it is now offering some brand new idea. The 2018 Ford Escape comes with an SEL trim level that bridges the gap between the more mainstream trim level SE and the luxury fixings of the Titanium model, let's see the engine, specs, features and more about this new car 2018.. 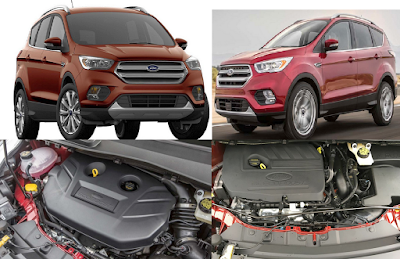 If we look at overall, the 2018 Escape excels in a few areas and falls short in others. Seemingly, the Escape will be one of the more engaging compact SUVs to drive with everything it has. The Escape is offering four-cylinder, tight suspension, quick steering, and many other improvements that can only be outmatched by Mazda CX-5. Well, let’s see what do we have with the 2018 Ford Escape engine to make just the right decision about this compact crossover’s judgment.

2018 Ford Escape is offering four trim levels consisting of the base level S, SE, the new SEL, and the top grade Titanium. Since there is four trim level to choose from the Escape, you can get the one that is the right level for you. There are many differences among those four models, of course, and if engine factor is matters a lot for you, probably the upper level or even the top grade should be your selection. Each level is offering different standard engine, features, and some advanced option to get the most out of the car. Admittedly, we need to note that every level is also stating the level of the price. Let’s just hope that you can find the right option for the standard rate for you take a look our review.

Let’s start with the base level S of the new Escape. The standard in Escape S is a 2.5L engine with intake variable cam timing. It is a four-cylinder engine resulting in 168 horsepower and 170 pound-feet of torque, with a six-speed automatic transmission. The powertrain of this model is front-wheel drive. You can opt for adding an Engine Block Heater to this standard if you wish. It sounds so-so to anyone who needs a powerful engine. Now, let’s move to the second model that is the SE. It is offering the 1.5L EcoBoost with Auto Start-Stop. This engine with 30 highway mpg is standard on this model and the upper-level SEL model. This engine is teamed with a six-speed SelectShift transmission that is offering the convenience of an automatic or the feel of sporty of a manual. 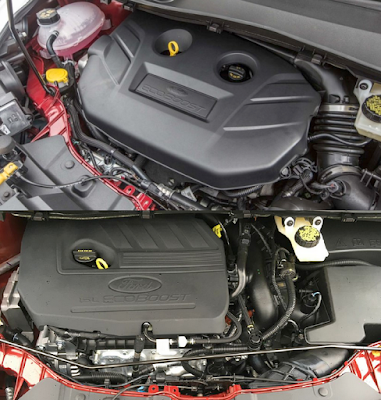 With the Auto Start-Stop Technology, it can reduce fuel consumption and vehicle emissions during the drive. This model offers the all-wheel drive and even a Sports Appearance for an optional package. Upgrading to the SEL, seemingly it doesn’t make significant changes if you start from the SE. This model bundles all SE equipment with a turbocharged 2.0-liter four-cylinder engine that is 245 hp, and 275 lb-ft. It also offers you a six-speed automatic transmission for upgrading to this level. At the top of the Ford Escape lineup, we have the Titanium model. It is the top grade with 2.0L Twin Scroll EcoBoost with Auto Start-Stop. This 2.0L Twin-Scroll EcoSport engine of this Titanium model delivers 245 horsepower. The Twin-Scroll design of this model has two chambers with the addition of two exhaust runners which are flowing into the turbo. Exhaust from pairs of cylinders is then gathered in an alternating sequence for maximizing the pulse energy to the turbine wheel to get quick torque delivery.

Well, that’s a short summary of 2018 Ford Escape Engine and Specs. Each model of the Ford Escape typically comes in multiple versions, although the available trim levels share many aspects. At this time, the engine of 2018 Escape is facing a challenge from its competitors in term of power and efficiency. With all the variation you can choose from the Escape, it gives more opportunity for the customers to get just the right model with all the right bundles. The powerful turbo four-cylinder provides the ford with Escape rapid acceleration. This engine is powerful, and it makes accelerating up to highway speeds and passing slow-moving traffic a breeze. With this engine, the Escape is a crossover SUV in the mission, but it wants to be driven like a sporty hatchback. Advertisement